BIOHACKERS – Worth watching or not?(No Spoilers)

Biohackers is a fast thriller following medical student Mia who discovers the use of highly advanced biohacking technology in her university. There are six episodes and they’re about 40 minutes apiece. It’s very easy to watch this. We found it was like the episodes rolled off, they just kept on coming and we put the next one. It’s one of those series that makes you want to watch the next episode.

Biohackers – Streaming on Netflix from August.

From THC chips to genetic enhancements, welcome to the planet of Biohacking. When “Mia” (Luna Wedler) begins her medical degree, she looks like other students. But when she gains the trust of the brilliant Professor Lorenz (Jessica Schwarz), it becomes apparent that she’s hiding a secret so big it could change the fate of humanity. From the director of Girlboss (Christian Ditter) here comes a thriller which will cause you to question the makeup of life itself.

Biohackers is a Mixed Bag

We do feel like this series was a mixed bag. It’s the first Netflix original series to be stored in DNA. So we mean that’s very cool. You can watch like a little minute interview or a kind of explanation of what they’ve done. We love the idea of them storing a Netflix series in DNA that’s a lot of fun and that’s the best thing about it. The reason why we say it’s a mixed bag because there’s a mixed bag of storyline here. You follow Mia who is supposedly this university medical student who has a very very big past. She has a big reason to be there and the main story is about that. In fact about the hook of the whole series, we felt like we were lied. It’s because the hook of the whole series at the beginning, you get this very intense scene and it looks like it’s going to be one of those scenes and without doing spoilers that scene at the beginning is what we expected to happen throughout the six episodes.

We expected there to be that sort of intensity but instead, it keeps coming back to that and it keeps coming back to that one scene and how they got there. And so we felt a little bit disappointed because what it turns out to be is a, who done it and why they hate and why they have done it. Also, for the most part, you can guess what’s happening and you can guess where the plot’s going to go except towards the end.

The end was like, they were ready to finish the series but they threw something just in case if we needed a second season. Which we felt was a little bit annoying because we think they could have finished it off quite nicely.

Mia and roommates are lovable

The best thing according to us about the series was this. Mia as a university student she encounters her roommates and her roommates have all very quirky personalities.

But we really like some of them. One particular dude who’s experimenting all over the place and he’s a lot of fun to watch. And then you have you know the other roommates who are just seemed really smart but also kind of wacky and quirky. We think their acting was fine. Together they bring levity to the series because it’s often quite serious in tone. As to the science itself, most of us can’t speak to that nature. We are not biomedical students but as an audience member, you can kind of agree or go along with the sense of disbelief and put some certain theories aside or how they’re able to get into security stuff without being seen. 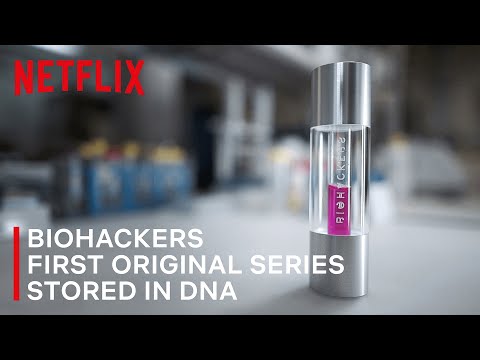 There’s a whole bunch of stuff towards the end. Especially the last episode where there’s someone injecting stuff into dripping bags or an IV and when we were watching it seemed like that would never happen especially in a very secure unit. If you saw blood in an IV bag you would change it immediately. So there are things here in the stairs that are just unbelievable. If you know anything about the medical side of things you will find a few things very unbelievable. You will have to put that aside. If you can’t do that you’re not going to enjoy this series.

It’s just a bit unbelievable like the way they get away with certain things. The way that certain things happen you just don’t feel like that would happen in real life. So there’s a lot of that kind of “okay I’m just going to have to put that sense of disbelief to the side because otherwise, I’m not going to enjoy this series at all”.

But for the most part, it is a fairly fun ride. You can go through it from you know A to B. Guess what’s going to happen and you will definitely know who’s going to end up with who? You know it has plotted for point. It’s very a cliche and that it’s not going to keep you guessing at all but the way its filmed the way it’s acted there are fun moments to be had here. Some of the soundtrack and the score are good and well placed. That hook at the beginning we just wish there was more of that sort of intensity.

We might get to see a second season or it looks like they want to. We really hope they do delve deeper into this kind of biohacking because although the series is called Biohackers we felt like there could have been more biohacking.

It’s not brilliant but you might enjoy it. We really like the fact that Netflix now has a TV series that is in a DNA sequence. We find that amusing.