The top American model of the 70s, Lauren Hutton, once said, “Fashion is what you’re offered four times by designers and style is what you choose.”

This iconic statement defines style aptly, right? While many fashion trends are recycled at a snail’s pace, some statements are making a comeback with such a vengeance that it will shock you to the core.

Chokers were originally symbols of prostitution. French expatriates wore them during Robespierre’s Reign of Terror as a tribute to those who were executed by the guillotine.

Not exactly an excellent introduction, we understand, but all the more intriguing. It was prevalent in Victorian England due to Queen Alexandra, who wore this type of necklace to conceal a scar on her throat.

This quintessential jewelry made its comeback in the 90s with many celebrities sporting this look. Fast forward to 2021 and chokers are again taking the limelight in terms of this summer’s emerging trend.

Ever guessed that the cargo pants sitting in your closet were once a military uniform? These loose-cut trousers were developed for rough, outdoor use and are characterized by one or more cargo pockets to hold many necessary items for military personnel to carry on them.

Though military use is outdated, it continued to hold its footing in the 90s. So much so that they were a rage. Although sales severely declined in the 2000s, this trend had something else in mind entirely, or so it seems. Die-hard fans kept it alive and kicking, and you have to thank them for their farsightedness.

These trousers are a very versatile option. You can pair them with everything and anything. Next time you go on a picnic or a backpacking trip, we’re sure that you will need them. The next time you cannot find something to pair with your t-shirt on a casual day out, go for cargo shorts and thank us later.

The scrunchies were patented by Rommy Revson, the celebrated pianist and singer in 1987. And to think that they are named after her pet poodle, Scunci, the thought is hilarious but genuine. It was an alternative to prevent hair loss from the metal hair ties that were in use then.

While the scrunchies were in vogue until the 90s, courtesy of shows like Friends, Seinfeld and Full House, the scrunchies’ popularity declined in the later years.

They’re back in town with industry biggies donning them. The Hadid sisters, Kim Kardashian, and singing divas like Jennifer Lopez and Selena Gomez seem to adore it.

Oversized Jewelry- do they work?

Rappers in the 90s wearing chunky gold jewelry made the kids cry in fear. They were just everywhere. People were alarmed by such outrageous public appearances. Big chains became synonymous with rappers. People gradually began approving it and boom!

Oversized jewelry is making an appearance in a less blinged-out edition. Pair your minimalist, classy outfits with oversized, minimalist hoops, chains, ear studs, or even bangles for that matter.

Make sure not to exaggerate it. If you wear studs, go for a bracelet and if you choose a heavy neck chain, do not wear anything else. Be confident of your bold choices. Remember, people put you down only when you allow them to do so.

Bubblegum Pink is the new Vogue

Once a symbol of queer gender identity, pink has been rebranded. It is the new emerging rage in the fashion world.

Pink has been considered a color too “girly” for a long time. This has even led to the people loving the shade steering clear of it. Time has come to end it and break all stereotypes.

The fashion world has been taken by a storm ever since famous brands like Marc Jacobs, Prada, Gucci, Miu Miu, Celine, and many other tons of labels have been incorporating these colors for their runway models.

While all hues of pink were acceptable, bubblegum pink was the black sheep. It defined the artists who were hell-bent on shattering the beauty sleep of the mockers.

Celebs today are using the same trick in the book to put the people who jeer at them down. The anti-neutral colour is what fashion is all about.

Sport never gets old. Initially called jockbra, this was perhaps among the only trends popularised by sportspersons. Majorly invented to support women’s breasts during exercise, it has come a long way since then.

It came to the spotlight in the 90s with a controversy. The media was outraged by scandalous models posing in minimal lingerie. These are their words, not ours. Fashion brands used sports bras to alleviate the decency concerns and they were an instant hit.

As with the changing world, the mindset of the people changed. Victoria’s Secret promoted lingerie. Sports bras were popular but not that much. This trend was later revived in the following years.

Kate Winslet posing for Calvin Klein was just the beginning of it. Now they’re everywhere. People love it and so do we!

Silk is the new Statement

Silk dresses were favorites of women in the 90s. Trendsetting models and actors like Kate Moss, Gwyneth Paltrow, and Naomi Campbell deserve the credit for popularizing it.

They lost their importance as being the most elegant of all outfits to monochromatic neon colors and naked dresses. It is back with a swing after all these years and turns heads everywhere.

The silk trend has moved on to headgear now. Printed silk headscarves are exhibited by Kylie Jenner, Bella Hadid, and Beyoncé. This has now reached the masses as well.

Silk is turning the fashion world upside down from head to toes, be it in this new decade or two decades ago.

Baggy pants were everywhere in the 90s. They were adored because they appreciated oversized and loose contours.

Get out of your standard fashion choices and embrace these baggy pants. They will give you comfort and will be a nice change from the same old sweatpants.

Pair your favorite crop top with patterned baggy jeans and complete the look with chic heels or a pair of sneakers. You will look great in this ensemble. Bella Hadid and Hailey Baldwin have perfected this look already.

Cardigans- the most versatile piece of clothing

We cannot simply conclude that cardigans went out of style after the 90s, for they did not. The only difference is, cardigans have turned “sexy.”

Ribbed cardigans of the 90s have been modernized so that they can be worn for a business look or even a casual one.

Fashion houses like Brunello Cucinelli and Fendi, and GCDS have a variety of cardigans to choose from.

Fashion influencers and style mavens love it. Dua Lipa, Alexa Chung, Kendall Jenner and Katie Holmes have been captured wearing a cardigan on various occasions. Even though you might not want to copy the models, cardigans certainly have a promising future. 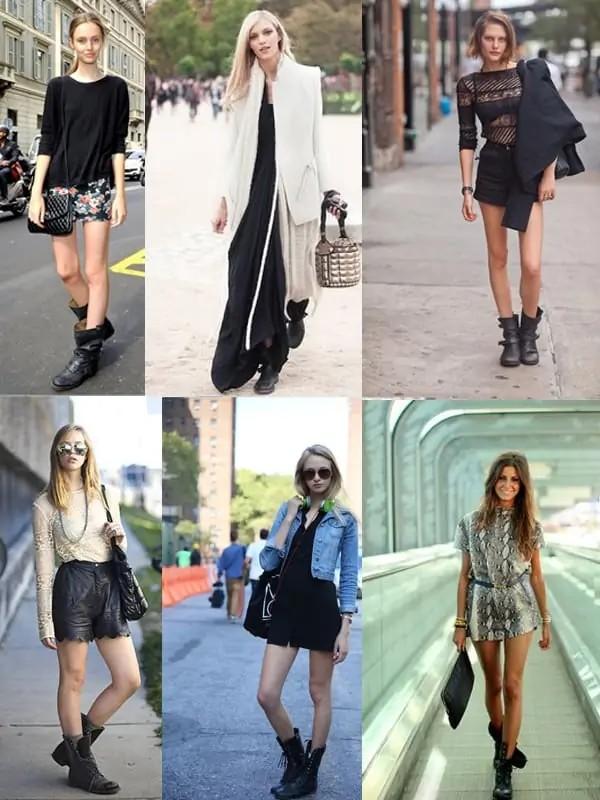 Distinguished fashion designer Christian Dior, the founder of the globally famous fashion label “House of Dior,” once quoted, “You can never take too much care on the choice of shoes. Too many women think they are unimportant, but the real proof of an elegant woman is what is on her feet.” This saying gives us a fair idea of how crucial our footwear is in completing our look.

Lately, we’ve seen ankle combat boots of the 90s resurfacing rather unexpectedly. Whether we are putting them on for the first time or are previously acquainted with it, we have to admit that these boots will give you an edge over the others.

It will make you look your best, even on your worst days. Don them on with a pair of jeans or a dress. All outfits look good with this footwear. You will get the ubiquitous vibes of the 90s when you put these on.

It is pretty difficult to envision an R-rated action-comedy more boring and drawn-out than  “The Hitman’s Wife’s Bodyguard” despite all the ‘Guns...
Read more
Facebook
Twitter
Pinterest
WhatsApp
Linkedin
Email
Print
Previous articleWatch love island season 6 on Hulu for these reasons
Next articleTop 4 Sexy and Drool-worthy Hairstyles on Girls that Men Find Hard to Resist